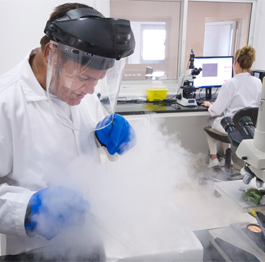 Control of the ovarian cycle

Camels are seasonal breeders and induced ovulators, normally only ovulating when mated. Efficient methods for induction and synchronization of ovulation in female camels have been developed at the Camel Reproduction Centre. The follicular cycle is monitored in all females by ultrasonography and when a mature follicle is detected in the ovary, an injection of a gondotrophic hormone is given to induce ovulation. Ovulation can be confirmed by ultrasound and is a necessary prerequisite for preparing animals to be inseminated and synchronizing recipients in an embryo transfer programme.

It is now a straightforward procedure to produce multiple calves each season from successful racing camels. At the Camel Reproduction Centre the follicular wave cycle is monitored in female donor camels using ultrasonography. They are injected with hormones to stimulate development of several follicles before being mated to the selected male. The embryos are collected non-surgically 8 days after mating and transferred to synchronized recipient camels that carry the pregnancy to term.

Pregnancy can be diagnosed very accurately by ultrasonography as early as 18 days after mating. The fetus first becomes visible between days 20 – 23 after mating and by day 60 the head, neck and legs can be clearly discerned.

If there are not enough recipients available at the time of embryo flushing and transfer, embryos can be deep frozen and stored in liquid nitrogen (-196ºC) for transfer in subsequent months or years. At present, experiments are being conducted at the CRC to deduce the best methods of freezing embryos using slow-cooling and vitrification methods.

Bisection and sexing of embryos

Early blastocysts have been split in two halves using a micromanipulator and each half transferred to a separate surrogate mother, giving rise to identical twins.

In addition, small biopsies of embryos have been taken and, in collaboration with Molecular Biology and Genetics Lab (MBG) in Dubai and Finn Enzymes in Denmark, the sex of the embryo has been determined.

The Camel Reproduction Centre has developed the method for the collection of semen from male camels using an artificial vagina (A.V). The quality of the semen is analysed under the microscope and any sperm abnormalities identified. Female camels are monitored at the Centre by ultrasonography, so that they can be inseminated at the correct time of the follicular cycle to maximize their chances of conception.

Freezing semen allows for infinite storage and preservation of valuable genetic lines. Various methods have been used to liquify , dilute and freeze camel semen, but with only limited success. The problems associated with freezing camel spermatozoa may be attributed to the difficulty in handling the semen because of its high viscosity which makes mixing with cryoprotectants difficult. In addition, cryodamage caused by the various freezing and thawing techniques leads to changes in the structure and physiology of the sperm which impairs fertility and therefore is an area that needs further investigation. The objective of our laboratory is to develop an efficient cryopreservation method for camel semen.

The World’s first Cama, a male, was born in January 1998 and the second, a female, was born in February 2002, followed by 4 more all born at the Camel Reproduction Centre. They are hybrids between a male camel and female llama created by inseminating the female llama with semen from a male dromedary camel. They do not have a hump, but they do have the woolly coat of the llamas with the added strength of the camels.

The Camel Reproduction Centre has utilizing a videoendoscope to place very low doses of fresh semen directly onto the uterotubal papilla that connects the uterus to the oviduct at the anterior tip of the uterine horn. This allows the sperm to gain immediate access to the oviduct and thereby provides the best possible chance for them to successfully fertilise the egg when ovulation occurs. This method utilizes only a fraction of the dose of spermatozoa required for conventional insemination.

The pregnancy state in mammalian species depends upon the pre- implantation conceptus sending a chemical signal to the mother that will prolong the lifespan and secretory function of the corpus luteum to keep her pregnant. Culture studies have shown that camel embryonic tissue does not produce interferons (the MRP signal in ruminants) but does produce oestrogens (similar to the horse and pig embryos) from as early as Day 10 of gestation. This indicates that oestrogens could be involve in the maternal recognition of pregnancy in camels.

Histological studies have shown that implantation occurs around day 14 of gestation and by day 25 a well developed microvillous junction has developed between fetal and maternal tissues forming the epithelio- chorial placenta. Giant, multi-nucleate trophoblast cells develop at regular intervals along the trophoblast which, histochemical studies show, could be involved with oestrogen synthesis for the maternal recognition of pregnancy.

From Embryo transfer, to investigations into infertility problems, the CRC does it all.

Located just 45km outside of Dubai city, the CRC possesses vast holding pens, and so much more.

Our team of experienced and passionate individuals make this unique and challenging endeavour possible.